The Roost Of Great Tribulation


On 02-14-12, I drempt of 2 sets of mother hens who were in great need. The first of the mother hens I saw, had a nest of hay to roost her chicks in, but she was desperate because there were so many new baby chicks with her and there was a lack of room in her roost. Also with her were bigger, growing chicks and I could see in the eyes of one of these chicks a desperation for food, so much so , that in the dream I thought if I had held my palm out to the chicks, they would have plucked the flesh off my hand. In the dream, there was little to no grain to feed them with and there was great trouble , as in restlessness, in the eyes of the mother hen and in the eyes of some of her chicks.

The second mother hen and her chicks didn't even have any hay to roost in. I saw her looking at me for want of some hay. I looked around the property I was on and saw the hay supply was gone and there was but little trace amounts of hay sticking out of the bins of supply I went to, but were empty. I could tell the thoughts of the mother hen that she wanted a place to keep her chicks together, as though there was a fear of them becoming scattered, due to no hay to roost them in. 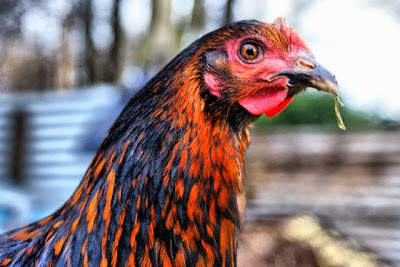 Interpretation - These two sets of mother hens in great need represent the church in the tribulation to come. The first set, with a place to roost, is going to be the church during the time of trouble to come, when the economy is collapsed from the repercussions of the massive destructions to come. Churches, which are the roost, are going to be busting with a lack of room from the many people turning to the Lord during the time of trouble. As the mother hen was desperate to meet the needs of her baby chicks, so to will be the desperation of the pastors of these churches and ministries because they would not believe the prophetic word of the Lord of the death and destruction that is coming to the land. They would not believe, so to store up grain and prepare. The weakness of our flesh will cause a desperation that has not been seen in the US, since the days of the great depression. The chick that was ready to even pluck the flesh off my hand represents those weak in the flesh and during that time of great crisis, will be tempted to sin, to turn from the Lord and become angry, that they would take advantage of the body of Christ, to do harm to the hand, in desperation because they were not prepared with this prophetic word.

The second mother and her chicks represent the church of California. When the tsunami, then mega quake strikes the land, many pastors will not even have a place, a roost to gather the church. They will be left homeless from the destruction and the lack of hay, being the lack of resource to build a roost, a gathering place, will be hard on the flock and the temptation will be to scatter. Some chicks will be lost and food for the vultures. The economy will have a severe crash from the destructions to come and these churches of California will close down, struggle and be tried.

Lord, I pray you would prepare your people, according to their faith, as much as possible for what is to come. Lord, the times are going to be desperate. Show your church that these are the days not of expansion and investment, but a time to storing up and preparing. Show those who think themselves so spiritual, the weakness of their flesh, so to prepare. Lord, through these dreams, you are showing us our need, but Lord, your church is in unbelief because they think they need not the word of the prophets and watchmen. They ignore your prophets and watchmen! Lord, rebuke your church in kindness to show them, thay must yield to this word, or they will not be ready for what is to come. If the shepherds do not yield, I then pray you bring stronger warnings, so their actions will begin to prepare the rest of the flock, for discipline is your love and stronger discipline is your greater concern.
Lord, awaken your church in California. They are so unready, that they will become scattered and without a way to roost. Lord awaken them to have contingency plans to escape. Help them to see the warning tsunami is your sign to them to evacuate! Lord prepare them a roost by invading their plans and programs. Shake the pastors. Show them you will require of them this word, to prepare the house to move or they will suffer in great need when there is no hay left and the grain is gone.

In the name of Jesus Christ our Lord, Amen,
Email ThisBlogThis!Share to TwitterShare to FacebookShare to Pinterest
Home
Subscribe to: Posts (Atom)